James Rolfe plays the character known to all as the Angry Video Game Nerd, the penultimate game reviewer and universally acclaimed video game genius. There isn't a thing my boy James doesn't know about Nintendo, or SEGA? Hey speaking of which, which one's better? Heh, just ask James he's got the answer for ya right here, yeahhhhh: 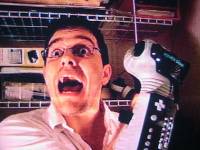 It's probably worth noting that James knows more about games than you. For example did you know that they put all the E.T. Atari games in a landfill, heh, well now you know. To the untrained, James' flamboyant facade may seem a farcical opinion laden series of rant videos, but fear not - those in doubt should simply be made aware that the AVGN is actually a cleverly crafted character played by James Rolfe, sort of like Pee Wee Herman, Mr. Bean, or Morgan Webb.

Several fine DVD releases of James historic works are now available on Laserdisc, audio cassette and Game Boy Advance game paks. Super fans do not go to Youtube because purists want to support the AVGN movie (destined to be a hit) in theatres sparsely dotting the USA.

- James (heh sorry, my personal bond with James often makes me forget that the AVGN is a character and not the real James who I am very good friends with and we go out all the time for milkshakes in my fantasies that I have during the parts of his videos where Mike Matei starts talking), LOVES the GameTrailers girl.

- Jam– AVGN's best friend is Mike Matei, aka Mother Fucker Mike. He helps out in James videos because James can't tell him to hit the road since he's his real friend and I wish that was me because Mike Matei is not very smart and I am the ultimate AVGN historian.

- My favorite AVGN video is the one where he sh*ts all over Bugs Bunny, because I had a dream about him doing that to me one time, only instead of it being a dream it was me in my room and the lights were off and the door was closed and I had my pants pulled down around my ankles and several boxes of tissues to clean up all the rubbing alcohol I was using to clean my game cartridges (paks)

- The best AVGN merchandise is available at ScrewAttack.com, I do not know why James is still with them because he is so much bigger than Stammering Crud and the rest of his cronies! A good contract with him and Machinima could lead to bigger and better things, maybe even a sequel to the movie that is 100% starring fans, like you and me friend

- Sometimes, AVGN will attempt to appear at a convention and fail to do so. However, the AVGN merchandise will arrive right on schedule.

In this section I've added pictures of the famous AVGN (James Rolfe) where he is doing something funny or epic! 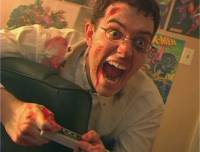 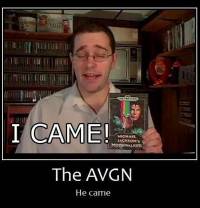 This is where AVGN tells us what is better or worst

Usually women, but in some cases extra cool Nintendo nerds are preferable (that's us!)

Batman because he's bad asssssSsss (heh, get it?)

- ASsSSSsSSSs (or any variations thereof)

- What were THEY THINKING