Nightwing, the original U burger flipper and internet rapscallion retired long ago from animal husbandry to begin an illustrious career in professional game development, starting with the popular title “Smackdown Seis: Shut Your Face an' Open your Hand We's Gonna Have a Cupcake Race”. The battles between Zekewars and Nitwing were legendary, often culminating in some sort of epic saikyo dojo super saiyan gaijin battle for somebody's attention.

Despite his efforts in many battles, Zekwar eventually had to give Pie up on a technicality that no one really understands or cares about. 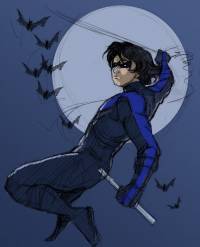